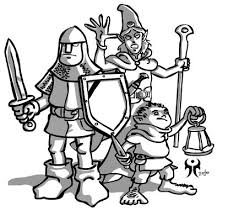 A dark, gritty roleplaying game, not because it’s a dark world, because its more realistic.

A game where there are more than two forms of opposition.

A game where disease and weather are as much a danger as a creature or a trap.

A game where verbal combat can cause a hero to give up their quest, effectively killing the character, the player can no longer play.

A game where players can invent their own gods, their own skills, their own spells, runes, scrolls, potions, villages, towns, cities, technologies.

A game where the GM can publish all of his hard work, so even if his own players don’t do anything with the quest, another GM will.

A game where dungeon crawls can be the bread and butter of an adventurer, and the economic flow of the world relies on them..